Greetings all you wonderful Lobsterites.

I’ve a lovely new blog over at http://fletchski.wordpress.com Why don’t you pop over and have a look at all the stuff I’ve been up to lately?

My last tweet may have confused some of you. What at first reads like some random dialogue followed by some brutal action is in fact my contribution to the on going story that is 3hundedand65. 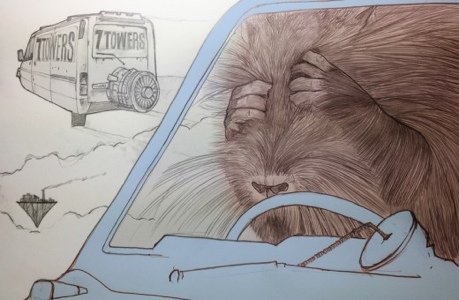 David Kirkwood has set himself the challenge of illustrating every tweet of story he receives this year and of combining all those into a graphic novel that will generate money for the teenage cancer trust. This is a huge task. Tweets are assigned to people who want to contribute, some of which have been from household names such as Jonathan Ross, Bill Bailey and Stephen Fry to name but three, with those selected tweeting their 140 character addition to the story and Kirkwood then illustrating it. The one thing that links the contributors is their wish to raise funds for teenage cancer trust and having at least 300 followers. Why do they need to have at least 300 followers? To make sure that the message from 3hundredand65 gets to as many people as possible to raise awareness and funds.

If you want to view my tweet in context head over to 3hundredand65 and catch up on the story so far, you could make a donation or even add your own tweet to the story so far.

My tweet today, if you missed it was, ‘Hope’s such a desperate word too many variables. I prefer things to be more concrete’ Lad then smashed a breeze block through her thoughts.

Another great article I’ve found today. This one is from the Bestseller Labs blog written by Jonathan Gunson. Whilst the piece focuses on Tolkien the writing tips are universal. Once again I’ll post a link to the original blog at the end of a short extract.

J.R.R Tolkien’s vast, sweeping stories have captured readers’ imaginations for decades. What are the secrets of his craft?

The answer to this question is the subject of today’s guest post by Roger Colby, author and English teacher. Roger imagined what it would have been like to have met Tolkien, sat down with the master and learned from him.

Roger Colby ‘meets’ J J R Tolkien
I have long been a fan of J.R.R. Tolkien. Every year, when school dismisses for summer break, I read The Lord of the Rings. This year I will read it to my children and do all the voices for them. Tolkien was a brilliant writer, but what if we could sit down with him and ask him any question we wanted? What if he could give writers advice about their own writing from his years of experience as an incredible storyteller?

This is possible if we read his letters. I have a musty old book entitled ‘The Letters of J.R.R. Tolkien’, edited by Humphrey Carpenter. I once spent the better part of a month reading it cover to cover and underlining every instance where the master of Middle Earth wrote about his process.

“…I certainly hope to leave behind me the whole thing [LOTR] revised and in final form, for the world to throw into the waste-paper basket. All books come there in the end, in this world, anyway” (121).

The Lord of the Rings has a worldwide following, has inspired films, video games, animated features, songs, poetry, fan fiction and countless other things, yet its author felt that in reality it may not be that important to the world.

There are several other instances where he writes to people about how humble he feels about the things he writes and that they are not really life changing at all, but simply imaginings “from my head”. In Tolkien’s opinion, The Hobbit was published out of sheer “accident”, as he had passed it around to a few close friends, one of them being C.S. Lewis.

Finally (and lucky for us) an Oxford graduate, Susan Dagnall, who worked for the London publishing house of Allen & Unwin, encouraged him to submit it for publication. He did, and there are pages of letters where he struggles with the process of publication. He was not, in any way, a vain man, especially about his writing.

In another letter to Sir Stanley Unwin dated July 21, 1946, Tolkien lists a mound of personal struggles he was facing: being ill, being overworked and missing his son Christopher who was away in the Royal Navy. He put many of his struggles aside, though, and went to writing.

He had to balance his day job with his desire to write epic stories set in Middle Earth. He found time. He made time. It took him 7 years to write The Hobbit. (117) The thing that he writes about most in this period is his struggle to get the work finished on his novels and to balance teaching and his many duties at Oxford College. Apparently he found a way.

The rest of this article can be found here.

Dialogue Only
Prizes: A minimum of $290 will be awarded, with $250 going to first place and $10 to our four honorable mentions. Our five finalists will also appear in Issue 5 of the magazine due out in January 2011. Last year we awarded $450 in prize money. For every entry over 25, an additional $5 will be awarded to the first place story. Update (8/24/10): Our current grand prize is up to $385, and we are also now offering $25 to the second place story. That’s a total of $440 in prize money.

The Rules: Compose a short story entirely of dialogue. You may use as many characters as you want. Your entry must be under 2000 words. Your entry does not have to follow standard rules for writing dialogue. Your entry cannot use any narration (this includes tag lines such as he said, she said, etc.). These are the only rules. Manipulate them however you see fit.

The Winner: The winning entry will be the story that most effectively uses dialogue to deliver a powerful and engaging story.

Judges: All finalists will be chosen by the Staff of Bartleby Snopes. In the final round we will have help from our special guest judges Rae Bryant (Moon Milk Review) and Kevin Dickinson (Writers’ Bloc Magazine).

Entry Fee: $10 for unlimited entries (only one entry allowed at a time; see Response/Notification section for more details). Entry fee is due at time of submission and will be collected through Submishmash (you may pay using a credit card or with Paypal). Note: We must have at least 25 entries or the contest will be cancelled and all entry fees will be returned.

Deadline: All initial submissions must be received by September 12th. Winners will be announced by October 12th.

Response/Notification: Our contest runs with a rolling rejection process. We will always keep our five favorite stories. You will be notified immediately if your story falls out of the top 5, and you will have the opportunity to resubmit. There is no extra cost for subsequent submissions, but you may only submit one story at a time. September 26th is the final day for resubmissions.

By submitting, you are stating that you are the sole author of the work and that it has not been published before. Work posted on blogs, message boards, personal websites, etc. all counts as previously published material.

Guest judge j.a. tyler said “this one was able to get the most complex story out of a mimnum of language, making the conversation resonate from within rather than filling itself with exposition / explanation. It also managed to feel natural and easy, the flow of a conversation as we are known to have them, us when we are not writing.”

Thank you to all who participated. All entrants have been notifited of their current standing. If you think you have not received word from us, please let us know.

Thank you to j.a. tyler from mud luscious press for serving as a guest judge (www.aboutjatyler.com).